I have seen La La Land five times, I own it on Blu-Ray, I’ve seen all the special features and I own the soundtrack on vinyl. It’s probably my favorite movie ever so fair warning this article contains some heavy bias.

By the opening seconds of La La Land you’ll know what this movie is about. Damien Chazelle even said in an interview that Another Day of Sun opens the movie because he wanted viewers to know what they were getting in to. After ADOS even I worried about what I was getting in to, Im not exactly a musical super-fan. As the movie’s first act starts to unravel there are lots of really well done, well orchestrated musical pieces. Considering that Damien Chazelle has been making this movie his whole life, I would expect nothing less.

The music might be the crowning achievement of La La Land, it serves that a musical should have great music but composer Justin Hurwitz really goes above and beyond here. We’re talking about a soundtrack that had two songs nominated for the same academy award, two songs! The choreography is impressive as well, stars Ryan Gosling and Emma Stone show off their dancing skills in A Lovely Night, and that ginormous piece Another Day of Sun is a triumph by itself. Music really sets La La Land apart, because the best movies are the ones that leave you humming.

Musicals are almost always considered feel good movies, but this is Damien Chazelle we’re talking about and he’s very big on humanism and the harsh realities of life. After the Planetarium number, La La Land takes a big turn. Gosling’s character Sebastian takes a job in a band (with John Legend) because he thinks it will please Emma Stone’s character Mia. During a performance by Sebastian, Mia is forced to the back of the crowd, in more ways than one. His new job dominates all his time, he misses Mia’s play and their relationship starts to unravel. She moves back home but the two are reunited when Mia is called in for an audition. Fast forward five years later and Mia has become a famous actress, she’s married with one child but surprise! That husband is not Ryan Gosling. It’s not until Mia and her husband unsuspectingly walk into a jazz club that we see Gosling and Stone on screen again. This is when my favorite scene begins. The Epilogue as it’s known, is a daydream by Mia in which her relationship with Seb began and ended like it would in a dream. When the epilogue wraps up Mia and Sebastian share one last look into each others eyes and then the movie closes in classic 1950s “the end” fashion. 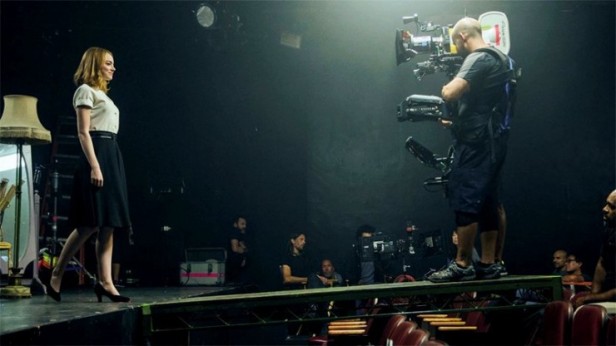 Part of what makes La La Land a great film, is how Gosling and Emma Stone make the relationship of Mia and Sebastian come to life on screen. The romance seems effortless to them. This is the pair’s third outing as a couple and I think we can expect more films to come for the two academy award winning actors.

If you walk away from La La Land with anything let it be this: to achieve your dream you have to be able to sacrifice. In the case of Seb and Mia they had to sacrifice their relationship for their careers. The emotional irony of it is that the two had to meet to accomplish their dreams, but they couldn’t stay together to accomplish those same dreams.

All in all, La La Land is more than a musical. It’s a love letter to 1950s Hollywood and it’s an emotional tribute to the harsh reality of life.

Like what you just read? Well if you like the content found here, remember to hit that follow button on the bottom right corner of the screen. Followers will receive an email notification every time I post, so you can jump on new content before anyone else. Comment are also highly encouraged, I love hearing from my readers and want to know what you all have to say. So leave a follow and a comment and keep on spreading the word.