This summer, New-Zealand native, six-time platinum recording artist, Lorde came under investigation by fans, late night hosts and countless news outlets. Maybe investigation is the wrong word here. What really happened was Ella (as her most pretentious fans call her) created an Instagram account called @onionringsworldwide. As the title implies, Lorde was basically rating onion rings on a five point scale across the world. Fans quickly discovered that Lorde was following this account even though they were seamlessly unrelated. Fans continued to dig and when they saw that each post matched up with Lorde’s current location, they put two and two together, and reached an obvious conclusion: that Lorde was running the account. What made @onionringsworldwide so great was the same things that kept it under the radar. How every post is low quality, rushed, and thoughtless. This is the Instagram of  someone who doesn’t care if people follow her or not, she just wants the world to know she has opinions galore on onion rings.

This post however, is not about onion rings, it’s about avocado toast.

A little over a month ago, on October 14th, @avocadotoastexperience posted their first photo. A picture of two slices of toast topped with avocado and a poached egg, simply captioned “cologne” followed by three avocado emojis. October 14th also happens to be the day Lorde performed in Cologne, Germany. Coincidence? Maybe, let’s dig deeper. The next day, another photo of avocado toast, this time in Berlin. What was Lorde doing on October 15th? Performing in Berlin of course. The dates continue to match up with her European tour dates, not to mention that Ella Yelich O’Connor herself recenlty endorsed the account with a follow. Perhaps the most damning piece of evidence came just a few days ago. 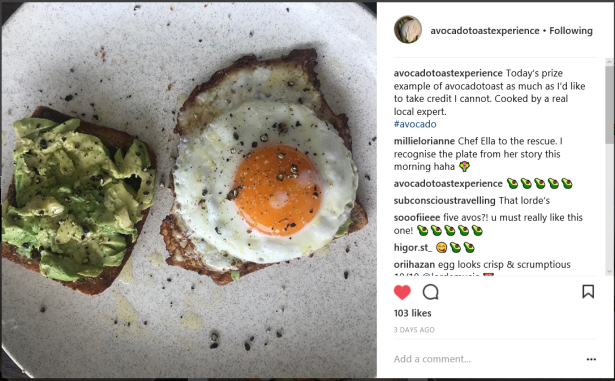 Just a casual post of some ‘cado toast, or maybe not. Here is a photo Lorde posted just minutes before.

The shape of the toast, the egg, the plate, the fact that the caption implies there is more breakfast on the way. The evidence is undeniable at this point, open and shut case, Lorde IS @avocadotoastexperience. She has denied some of these allegations in the comment section of Instagram the same as she did with @onionringsworldwide, but all signs point to her ownership of the account. Stay tuned for more on this fast-breaking story.

One thought on “Is Lorde At It Again?”